The Greatest Genius Alchemist Of All Time Wants To Retire 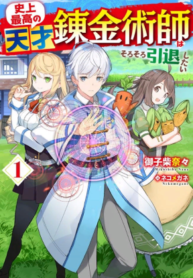 The Greatest Genius Alchemist Of All Time Wants To Retire Average 4.8 / 5 out of 8

The Kingdom of Canovaria. It is the country where alchemy is most developed. Many yearn to become an alchemist and enter the Canovaria Institute of Alchemy, but it is difficult to enter and even more difficult to graduate. Even if they are able to enter the academy, many fail and give up on their dream of becoming an alchemist.

Rumors about his career path are constant. Becoming a royal knight, an alchemist directly under the royal court, and even marrying a princess… but what is the answer he has chosen from the choices he has made?

You’re the god of rom-com but you’re interfering with my romantic comedy life?

I’m in love with the Goddess, so I’m going to do my best in a different world

Corporate Slave is saved by a Beautiful Onee-san

We use cookies on our website to give you the most relevant experience by remembering your preferences and repeat visits. By clicking “Accept All”, you consent to the use of ALL the cookies. However, you may visit "Cookie Settings" to provide a controlled consent.
Cookie SettingsAccept All
Manage consent