My Fiancée is a Cool-Headed, Peerless Angel 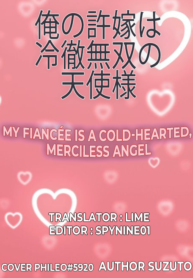 Synopsis There was an angel sitting in front of his house.   When Kojirou Isshiki returned home from high school, he found Shiori Nanasegawa sitting in front of the house where he lived alone.   She has an exceptional figure. She has a beautiful face with long, fine, sparkling hair, a slender body that makes you want to protect her, and clear skin that has been described as angelic beauty from the heavens.   However, she is an expressionless girl who doesn't talk much, and you can't read what’s on her mind. Still, she was extremely popular among the boys.   In less than half a year since entering high school, the number of confessions she has received is said to be in the double digits.   However, all of their confessions have been rejected by her. Thus, the nickname given to her is...   The Cool-Headed, Peerless Angel   Her nickname comes from the fact that she calmly analyzes her opponents, breaks down their arguments, and then rejects their confessions, as well as her angelic appearance.   ‘Why is the cool-headed, peerless angel in front of my house? ’   "You're going to live in my house?   "That's what I said.”   "I'm going to ask you a simple question. Are you sure?"   "What?"   "You're going to live with a boy, who’s also a part of your class."   "Nothing’s wrong with that- after all, you and I are engaged"   This is a girl who’s cool and quiet, and as you spend more time with her, you become more and more attracted to her.   And you watch her change little by little, as the ice around her melts down.   ~This is a story about such a situation.
Show more

How To Melt the Ice Lady

Lonely Me And The Lonely Caring Goddess

Love Advice From A Childhood Friend.

You’re the god of rom-com but you’re interfering with my romantic comedy life?

2021-07-21
We use cookies on our website to give you the most relevant experience by remembering your preferences and repeat visits. By clicking “Accept All”, you consent to the use of ALL the cookies. However, you may visit "Cookie Settings" to provide a controlled consent.
Cookie SettingsAccept All
Manage consent