After a Heartbreak, My Bitter Childhood Friend is now Sweet Like Sugar - Chapter 4.8

The next day after school.

I told Kokoa I had to do some errands, so she should go home first.

After that, I waited for the soccer team to finish and called Saotome to the back of the club building.

His words were unprofessional and rude.

He was not hostile, but uninterested. His reaction towards me was the same as Kokoa’s mother. A response with a lack of interest or just ignorance.

Naturally, this handsome guy seemed to believe that I was at the bottom of the school hierarchy. Nothing more than an insect.

“I’m Sawatari, and I know you’re not interested in my name. I want to talk with you, straight to the point. It’s about Kokoa Shirayuki.”

He raised his eyebrows.

“Ah, so it’s you! Recently, you seemed to be close to her… I thought you were just her childhood friend. Heh, so what is it?”

I heard this guy was targeting Kokoa, but he even looked into me? I’m frankly sick of people like him.

“You were harassing her by lying to other girls, right?”

“Ha! What makes you say that?”

“I overheard one of your girl’s conversations. She talked about stealing the diary from Kokoa and about you.”

“Damn it. I told them not to casually speak about it.”

I thought this guy was popular due to his friendliness, but he seemed to be the type of guy who was really underhanded, just like Kasugai told me.

“Ahaha, no way. Even if I had done something, you have no proof.”

Haa~ It sure is going well.

To be honest, I was pretty pissed off, and I was a bit hesitant about what would happen if he turned out to be a good guy.

But not anymore. I’m glad that he was stupider than I thought.

As Kasugai stated, Saotome apparently doesn’t care enough to put an act in front of other guys.

He was quick to show his fangs.

“Yeah, that’s right. But now, I have the evidence.”

I showed him my phone.

The voice recorder app was recording our conversation.

“It means I’ve recorded all the conversation.”

A moment later, he raised his right fist and hit me hard. My head shook, and my vision blurred.

I quickly threw my phone into my bag and covered my face.

He had punched me in the face.

This guy is too quick to get into fights. I used to believe that only women were like that.

“Hand over your phone!”

“It’s no use, I’ve sent all the data to my computer at home.”

My head felt a bit dizzy, but I tried not to show it on my face.

This guy is the ace of an athletic club, albeit a rotten one. He probably works out every day. I, on the other hand, am a lazy indoor person.

Even if I tried to fight, I wouldn’t be able to win.

Besides, if I got into a fight and teachers found out, it would be troublesome.

Also, I don’t want to get a grudge from this guy. It’s not just me, there’s still a possibility that he might try to harm Kokoa. I definitely want to avoid that.

“Don’t ever harm her again. Tell the girls not to do anything either. That’s all I want.”

“You don’t like being stated to, right? Then I’ll rephrase it. Please. Don’t ever bother her again. And me, of course.”

I’m the one who got down on my knees for Kokoa in front of her mother. But this time, I didn’t have any intention to lower myself in front of this guy.

I’m pissed that he hit me once, but I guess this is the least I can do to get rid of the problem as soon as possible.

Soon after, his expression changed from agitation to discomfort…

“…Tsk. All right, I get it. I’ll make sure it doesn’t happen again, so just keep your mouth shut, okay? Is that fine?”

“Don’t ever harass her again.”

He dismissed unpleasantly and disappeared from the scene.

I stared at his back and sighed heavily.

I hope this is the end of the matter.

In the meantime, I’ll ask Kasugai to keep an eye on the girls and to tell me if anything strange happens. Kazama is also… kinda delinquent and might be able to help.

Now that the matter with Saotome was solved, I got ready to leave… but soon, I noticed an intense pain in my left jaw.

That guy was quite serious about hitting me. I didn’t notice, but it seems it had swollen.

What a pain… I guess I should just go home.

But then I remembered that I had forcibly taken Kokoa to the infirmary when she was injured. I was quite high and mighty in front of her.

I wondered if the infirmary was still open.

“I fell. There was a big rock on the ground, and I hit my left jaw. So it was an accident… hik…?”

The nurse, Hanamori-sensei, put cotton on my cheek and looked at me suspiciously.

“Well, it’s okay. No matter what Herushi says, you’re not going to tell me anything. At best, you should be grateful that I’m still here.”

“I’m grateful. I’m indebted that you stayed and that you aren’t questioning me anymore.”

When I arrived, I realized that the infirmary should have been closed by now, but Hanamori-sensei had stayed behind to finish some of her work.

“I’m begging you. Please don’t tell anyone about this.”

“Well, there’s someone. I don’t want her to know…”

“I can keep my mouth shut if you want. But you should be thankful that Herushi is mature enough to keep your secret to herself.”

What’s up with that smug look on your face?

No, I guess I should have told you that you were already an adult.

But really, it would be troublesome if my words were to reach Kokoa. If she learned that I fought with Saotome, she would be worried or may be angry at me.

I remembered the time when I used to fight for Kokoa.

When we were kids, Kokoa was frequently teased by the boys in the neighbourhood. I was frustrated, so that’s when I decided to protect her no matter what— it was the story of my emotional youth.

I guess I’m still as emotional as ever. I think the reason I fought with Saotome was more out of frustration than to stop him from harassing Kokoa.

The only thing that was different from the past was the fact that a fight wouldn’t be able to solve the problem.

As I was talking with Hanamori-sensei, I heard the creaking sound of the door and saw the face of the girl I wanted to avoid.

“So, you were still at school.”

“Why do you look so messed up? And what’s with that face?”

“Did you fight with Saotome-kun because you heard that I was being harassed?”

As if she could see right through me,

“I know because I know you very well, Yū.”

“Well, don’t worry. We were discussing some stuff, and I got hit once. It’s not like we got into a fight. But why are you still at school, Kokoa?”

“I was worried, so I was looking for you. I had a feeling you were up to something.”

“How could you say that? Yesterday, you were looking all over the school because you were worried about me.”

She’s right. I did the same thing.

And tears rolled down to her cheeks.

I knew it… That she would cry.

“Kokoa, it’s not your fault. This thing happened because it was my decision.”

The treatment seemed to be over, so I bowed to Hanamori-sensei and stood up.

Right after that, I brought Kokoa to my chest and gently patted her head. 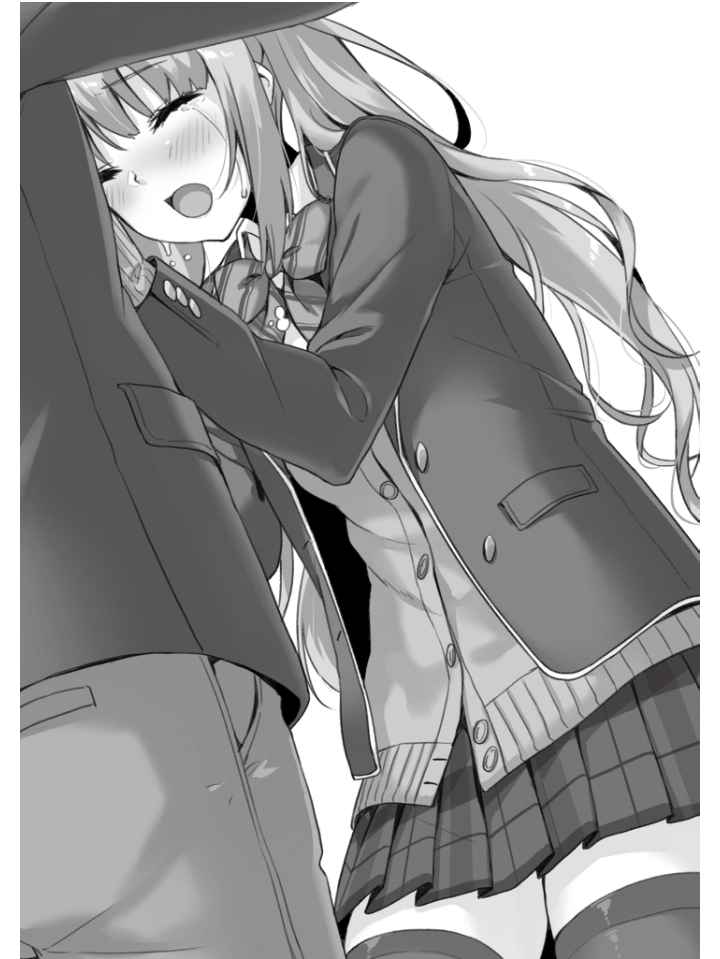 “Well, it’s nothing. You were the one who helped me when I was in trouble for the test, so I guess we’re even now.”

“That was because of my mom, and I owe you for that.”

“Then pay me back a little with ice cream. Then it’ll be fine.”

She continued to sob on my chest.

Well, how should I say it?

“Why are you apologizing?”

What do you want me to do?

I had no choice. I let her lean on my chest while patting her head.

Let’s do this until she calms down.

“So then, what should Herushi do?”

The Kicked Out S-Rank Appraiser Creates The Strongest Guild

After Marrying My Childhood Friend Who Was Supposed To Hate Me For Being A Gloomy Person, It Turns Out That She Actually Loves Me Very Much. She’s A Cool Takane no Hana On The Outside, but She’s Completely In Love With Me. The Girls Are Curious To Talk To Me, But Sorry, I’m Already Married.

Breakup, Childhood friend, Heartbreak, Rom-Com
We use cookies on our website to give you the most relevant experience by remembering your preferences and repeat visits. By clicking “Accept All”, you consent to the use of ALL the cookies. However, you may visit "Cookie Settings" to provide a controlled consent.
Cookie SettingsAccept All
Manage consent